A surprising things happens while this Texan is leaving a voicemail and he narrated the entire incident perfectly. When you visualize this story in your head, try not to imagine the Monty Python women or Dana Carvey as The Church Lady.

What the Internet Did to Me

Posted: March 31, 2011 | Author: will | Filed under: Uncategorized | Comments Off on What the Internet Did to Me

Sad As Hell is Â ostensibly a book review for Gary Shteyngart’s Super Sad True Love Story, Alice Gregory writes an essay that finally captures what I’ve felt around the edges of my daily life for the last few years.

I have the sensation, as do my friends, that to function as a proficient human, you must both â€œkeep upâ€ with the internet and pursue more serious, analogÂ interests. I blog about real life; I talk about the internet. Itâ€™s so exhausting to exist on both registers, especially while holding down a job. It feels like tedious work to be merely conversationally competent. I make myself schedules, breaking down my commute to its most elemental parts and assigning each leg of my journey something different to absorb: podcast, Instapaper article, real novel of real worth, real magazine of dubious worth. Iâ€™m pretty tired by the time I get to work at 9 AM.

This was my exact commute to Aruba. From Shteyngart:

â€œWith each post, each tap of the screen, each drag and click,â€ he confesses, â€œI am becoming a different personâ€”solitary where I was once gregarious; a content provider where I at least once imagined myself an artist; nervous and constantly updated where I once knew the world through sleepy, half-shut eyes . . . With each passing year, scientists estimate that I lose between 6 and 8 percent of my personality.â€

And finally, the impact that chosen isolation, in all those stolen moments on the sidewalk or in the cafe, has on us:

Shteyngart says the first thing that happened when he bought an iPhone â€œwas that New York fell away . . . It disappeared. Poof.â€ Thatâ€™s the first thing I noticed too: the city disappeared, along with any will to experience. New York, so densely populated and supposedly sleepless, must be the most efficient place to hone observational powers. But those powers are now dulled in me. I find myself preferring the blogs of remote strangers to my own observations of present ones. Gone are the tacit alliances with fellow subway riders, the brief evolution of sympathy with pedestrians. That predictable progress of unspoken affinity is now interrupted by an impulse to either refresh a page or to take a website-worthy photo. I have the nervous hand-tics of a junkie.Â  For someone whose interest in other peopleâ€™s private lives was once endless, I sure do ignore them a lot now.

A manifesto for the digital age (and a decent book review to boot).

Sad As Hell [via longform]

The best journalism-job want ad ever ever.

The best journalism-job want ad ever ever.

You should, like, strongly considerÂ applying to work for this guy:

We want to add some talent to the Sarasota Herald-Tribune investigative team. Every serious candidate should have a proven track record of conceiving, reporting and writing stellar investigative pieces that provoke change. However, our ideal candidate has also cursed out an editor, had spokespeople hang up on them in anger and threatened to resign at least once because some fool wanted to screw around with their perfect lede.

We do a mix of quick hit investigative work when events call for it and mini-projects that might run for a few days. But every year we like to put together a project way too ambitious for a paper our size because we dream that one day Walt Bogdanich will have to say: â€œI canâ€™t believe the Sarasota Whatever-Tribune cost me my 20thPulitzer.â€ As many of you already know, those kinds of projects can be hellish, soul-sucking, doubt-inducing affairs. But if youâ€™re the type of sicko who likes holing up in a tiny, closed Â office with reporters of questionable hygiene to build databases from scratch by hand-entering thousands of pages of documents to take on powerful people and institutions that wish you were dead, all for the glorious reward of having readers pick up the paper and glance at your potential prize-winning epic as they flip their way to the Jumbleâ€¦ well, if that sounds like journalism Heaven, then youâ€™re our kind of sicko.

For those unaware of Floridaâ€™s reputation, itâ€™s arguably the best news state in the country and not just because of the great public records laws. We have all kinds of corruption, violence and scumbaggery. The 9/11 terrorists trained here. Bush read My Pet Goat here. Our elections are colossal clusterfucks. Our new governor once ran a health care company that got hit with a record fine because of rampant Medicare fraud. We have hurricanes, wildfires, tar balls, bedbugs, diseased citrus trees and an entire town overrun by giant roaches (only one of those things is made up). And we have Disney World and beaches, so bring the whole family.

Send questions, or a resume/cover letter/links to clips to my email address below. If you already have your dream job, please pass this along to someone whose skills you covet. Thanks.

Awesome: Smart Video Enlarger is a Chrome extension that enlarges videos on YouTube to full window size. Starting with a bigger video is great, but what’s even better is that there’s no longer a big stutter when I switch from the default low-res to HD in full-screen.

Genki Sudo is an overachiever: a kickboxer, Greco-Roman wrestler, and retired mixed-martial-arts star who was known for his splashy entrances and flashy moves. Heâ€™s also an accomplished actor, essayist, and calligrapher, and the leader of a pop group called World Order. And in this excellent music video, heâ€™s taking New York by storm. One reason for the military’s peaceful response: the unique role it plays in the Egyptian economy. The military owns “virtually every industry in the country,” according toÂ Robert Springborg.

Springborg, a professor at the U.S.Â Naval Postgraduate School, has written several books about Egypt, he’s lived in Egypt, he’s consulted with the Egyptian military, and he’s an expert on the various businesses it runs. Here’s a list he rattled off from the top of his head:

So the military transformed itself from a fighting force to hiring force. And some of the businesses it got into were pretty far away from its traditional mission. For example, the military had all these forces stationed on the coast â€” a really pretty coast that lots of people would probably pay to visit. So, Springborg says, the question arose:

What are we gonna do with this military zone that is huge and in the most desirable part of the country and has extremely beautiful beaches, and some of the greatest â€¦ coral reefs in the world and was absolutely crying out for touristic development?

One of the few glimpses we have into the role of the Egyptian military in the economy comes via a 2008Â diplomatic cable made public by Wikileaks.

The Best of Sexual Harassment Stock Photography | The Hairpin

Posted: February 4, 2011 | Author: will | Filed under: just_for_fun, web | Comments Off on The Best of Sexual Harassment Stock Photography | The Hairpin

The Best of Sexual Harassment Stock Photography | The Hairpin.

2 minutes. This has been making the rounds recently; harken back to the days when “@” was a mysterious character.

Posted: February 1, 2011 | Author: will | Filed under: web | Comments Off on Map: United States of surnames 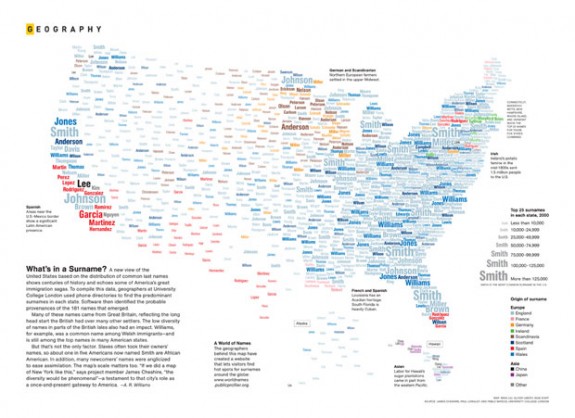 Mina Liu and Oliver Uberti for National GeographicÂ examine the most common surnames across the country:

What’s in a Surname? A new view of the United States based on the distribution of common last names shows centuries of history and echoes some of America’s great immigration sagas. To compile this data, geographers at University College London used phone directories to find the predominant surnames in each state. Software then identified the probable provenances of the 181 names that emerged.

The most common surnames are then placed geographically and colored by origin. Browse the full-sized mapÂ here. Is your name in there

I know I’m behind the times here, but I had no idea what they were mocking. I listened to the SotU and the Republican Response, but I didn’t know that “Tea Party HD” was showing her. For reference, here’s the original, with less comedy and more let’s-not-give-people-health-insurance:

I have to say, I’m pretty impressed with the SNL impersonation.

In which the venerable Chuck Klosterman writes anÂ article for Esquire in 2005 about Val Kilmer , and the surreality of the man I still think of as Chris KnightÂ . Klosterman is never dull to read and manages to write a genuinely fun celebrity piece, based around the fact that Val Kilmer is both genuinely nice and very, very weird.

Nathan requested it, you get it.

Posted: January 31, 2011 | Author: will | Filed under: Uncategorized | Comments Off on Nathan requested it, you get it.

I spend a lot of my time reading blog posts, magazine articles, books, and random detritusÂ from the internet. I also manage, with my extra spare time, to wade through a fair number of movies, TV shows, internet videos, to say nothing of always seeking out new music.

Nathan wanted to a simple way for him to subscribe to the “Best Of” the media I’m consuming, so I’m going to filter on interestingness, edutainment, and taste, and post the results here.

Most of the things here come from the blogs I follow (see the blogroll to the right), so lots of these posts may be old news to you.

Since I’m doing this for my friends and family, I’m interested in what your favorite things of the week are. If you want me to host your list, let me know â€“ I’d be happy to.